COLONIAL ARCHITECTURE IN THE PHILIPPINES (3) ILOCOS 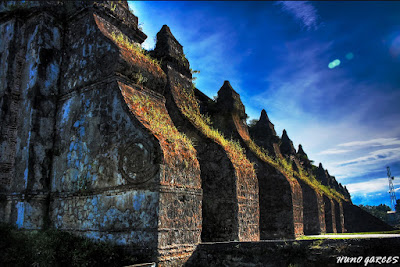 Some of the most notable examples of colonial architecture in the Philippines are located in the provinces of Ilocos, Luzon, north of the archipelago. It is a pleasure to visit Ilocos, because of its idyllic scenery and its rich culture and history, expressed in villages of clean and tidy streets that contrast with the chaotic traffic jams in Manila.

In this post we will review two types of colonial architecture: religious, in Paoay, and civil, in Vigan. 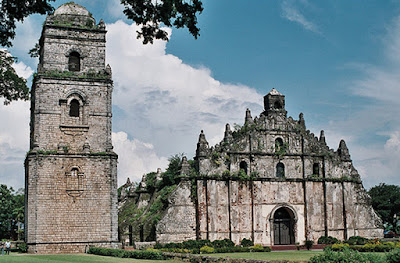 One of the most conspicuous examples of the so-called earthquake baroque architecture in the Philippines, which is the Church of San Agustin in Paoay (1704-1894), declared a World Heritage Site by UNESCO . 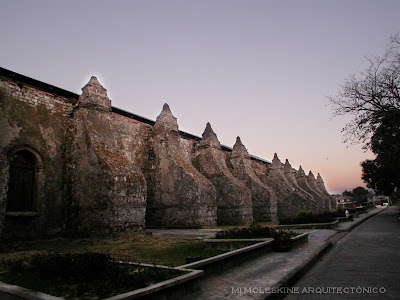 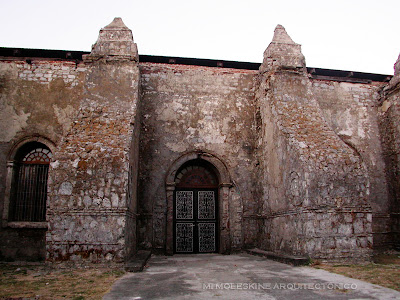 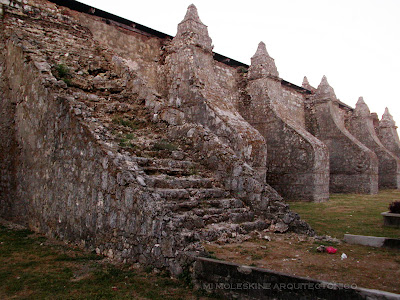 Paoay is a small village situated on a plateau, linearly organized along Marcos Avenue, which connects it with other surrounding towns.
The church nave, curiously, is oriented parallel to the main road, while preceded by a large atrium  from a side street. 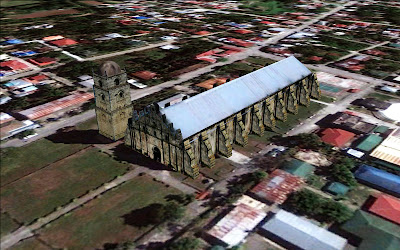 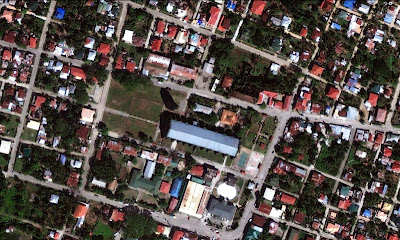 
The land where it sits is sandy, so the original buildings were frequently destroyed by earthquakes. Its builders, Augustinians priests, managed to counter the seismic effects by building thick walls and massive,  volute-shaped buttresses . 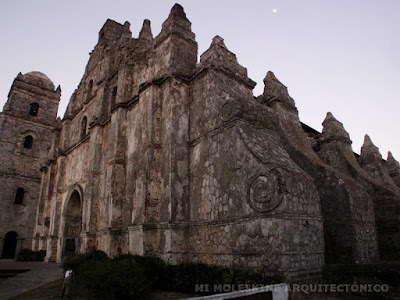 These sturdy buttresses are the epitome of colonial earthquake resistant architecture. 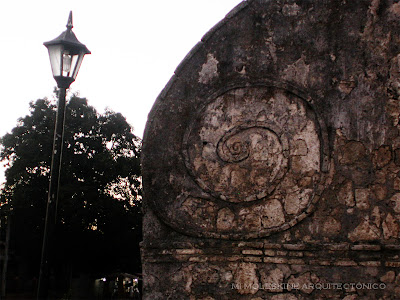 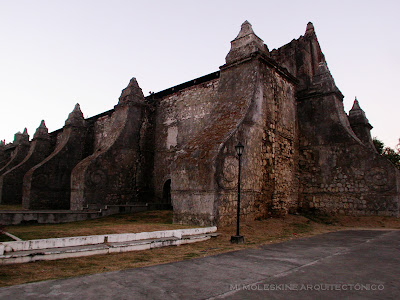 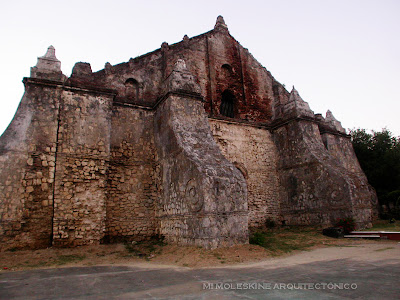 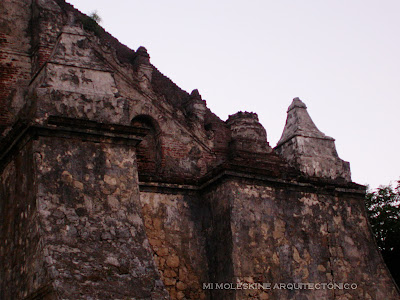 The triangular façade has an affinity with the Gothic style, because of the verticality of the pilasters and the pinnacles that crown the composition, though some say that has some influence of the Buddhist monument of Borobudur in Java, Indonesia. 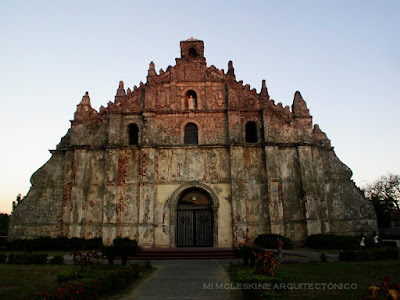 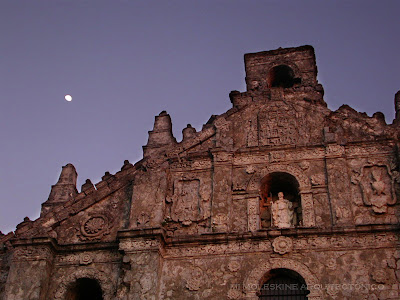 Another feature of this and many other Philippine churches is the separation of the bell tower with respect the main structure of the church. 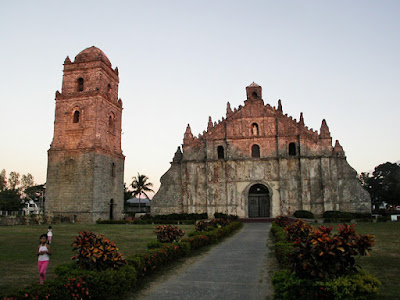 Paoay church, Ilocos.
It is common to find that, unlike Mexico or Peru, the bell tower is separated from the nave of the church.

"The first bell tower was built with wooden posts 3.50 m (4 varas). There were three bells. Fr Thomas Torres enlarged the tower [...] from 1753 to 1756. It was made of chopped coral stones, 12 per 16 inches thick, with molave braces put together, with the help of pulverized limestone mixed with molasses. " 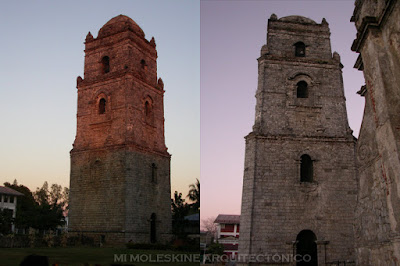 The interior of the church is a nave whose coverage is supported by a collar roof structure. 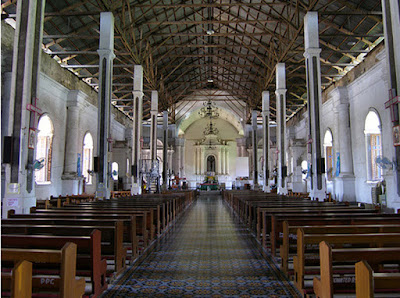 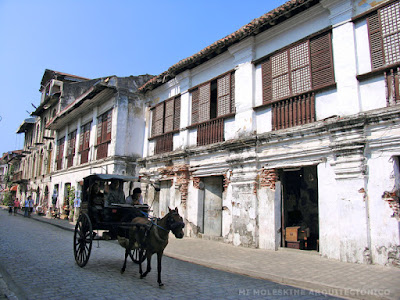 The charming town of Vigan in Ilocos Sur, is the best preserved example of Spanish colonial architecture in Asia. Its streets laid out in a gridiron pattern, according to the Laws of the Indies, housing a collection of well preserved colonial buildings, with white walls and picturesque balconies. While some of its features will inevitably evoked the architecture of my home Arequipa, Peru , the fact is that there are differences with respect to Latin American cities, as Vigan was influenced by Chinese and Ilocano cultures. 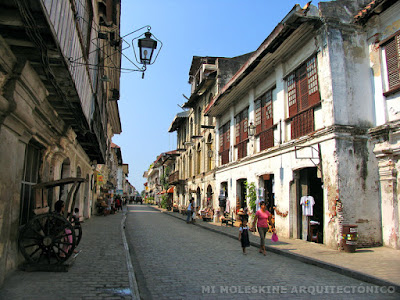 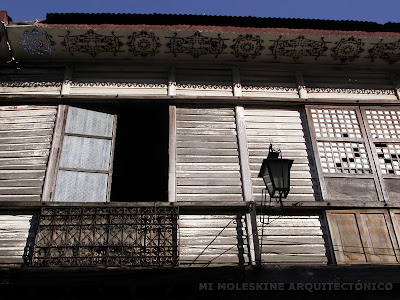 Vigan, Ilocos. Detail of the balcony. The windows instead of glass use a translucent seashell.

Vigan, an ancient port located on an island near the Abra River, was born in 1574 as a strategic point of trade with China. The population, Chinese and Filipino, also expressed their mixture in the architectural styles, made of wood and sloping roofs, inspired by the bahay kubo, the traditional Filipino house. 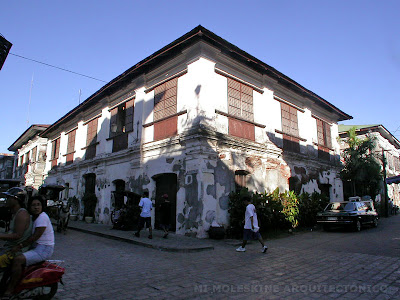 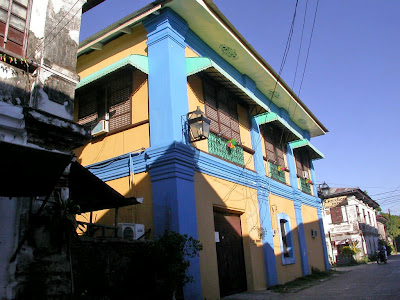 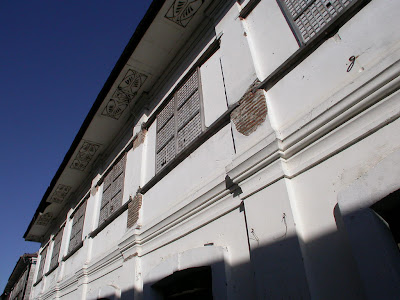 Sometimes the first floor was made of stone upon which a wooden second floor was built. 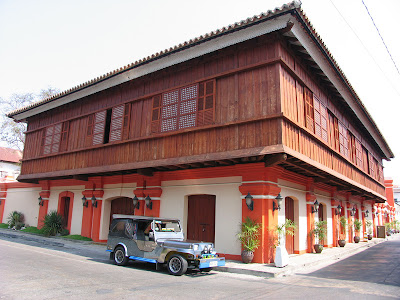 The urban layout is similar to a checkerboard, typical of Spanish colonial cities, but has an eccentric plaza to the north, linked to a secondary square. Many of the streets maintain a compact profile with no setbacks. 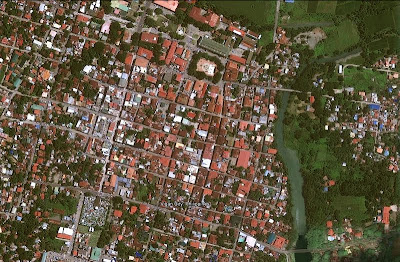 
These town, however, was about to disappear during the Second World War. During the Japanese occupation, a general settled in Vigan in 1943. When in 1945 the Allies began to reconquer the Philippines, the retreating Japanese usually left the villages they had occupied in ashes. However, this general was married to a Filipina. Before escaping from town, he left his family in the church of Vigan, promising to preserve the town and not burn it down, in exchange for protection for his family. This is how Vigan survived intact to this day. 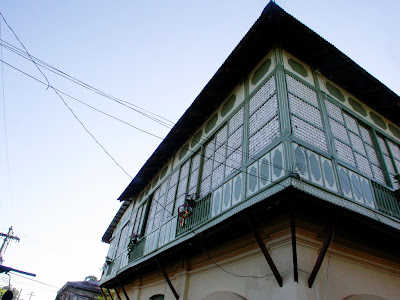 The house where the general inslaló Japanese.

Given its historical value, the quality of his factory, his urban scale and the conservation of its monuments (one of the few places not affected by war), Vigan has also been nominated as a UNESCO World Heritage site . Despite being significantly marketed for tourism, is quite an experience traveling to the sleepy little streets that seem to be frozen in time, whose cobbled stone pavement resound to the clatter of horses' hooves. 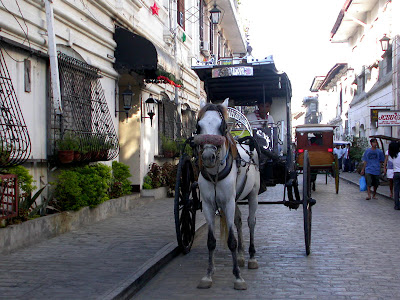 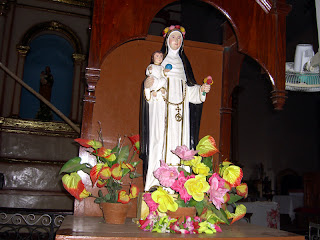 While Mexico was closely linked to the Philippines, there is also Peru's cultural influence to a lesser extent, particularly on religious issues. Peru's San Martin de Porras is one of the most popular saints in this Catholic archipelago. In addition, Santa Rosa de Lima, is "officially" the Patroness of Peru, the Americas and the Philippines.
I was very surprised when I commenting that issue with the locals, nobody seemed to know about it... 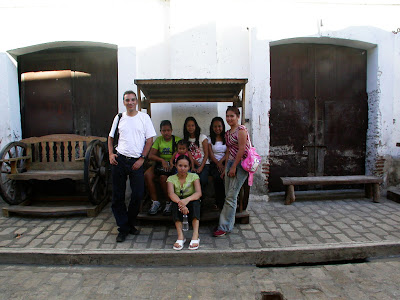