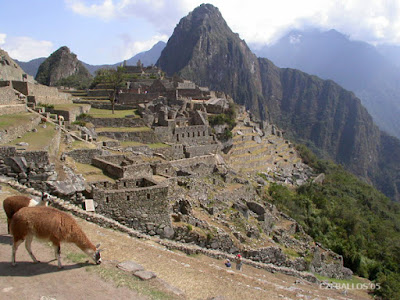 This article has two parts: the first one discusses Machu Picchu's architecture and urban planning as well as its relationship with the landscape. The next post will review aspects of its engineering, agricultural and hydrological planning .
Machu (old) Picchu (hill), located 120 km from Cusco, Peru, is a classic icon of the Inca civilization. Nestled atop a ridge at an altitude of 2430 m above sea level and 400 m above the Urubamba River, the city of Machu Picchu has become famous worldwide because it is a sample of Inca urban planning that has survived almost intact the colonial destruction, and also because it combines exquisitely carved stone architecture, massive and meticulous construction techniques, a deep knowledge of the geological and environmental aspects of the site and, above all, an impressive integration to the landscape that surrounds it. This reputation has earned the Inca citadel to be designated as World Cultural and Natural Heritage site by UNESCO in 1983 and has been chosen as one of the New Seven Wonders of the World . 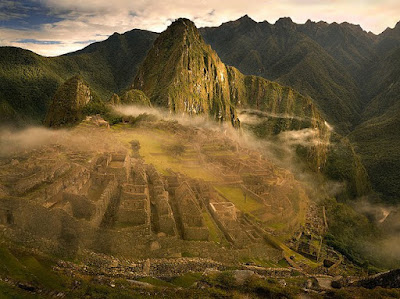 Photo courtesy of Michael Anderson
While Enrique Palma, Gabino Sánchez and Agustín Lizárraga reached the ruins of Machu Picchu already in 1906, it was the American professor Hiram Bingham who, along with a small expedition, discovered the Inca city to the world in 1911, thanks to the support of Yale University, and then through the National Geographic magazine. However Bingham also took nearly 5000 objects from the Inca city of Yale, whose have returned only recently to the Peruvian government after 99 years. 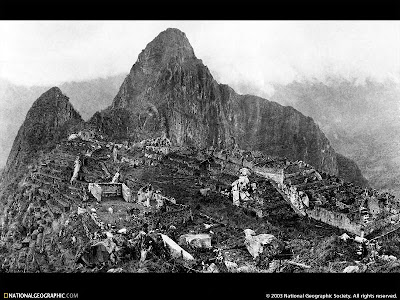 Photo of Machu Picchu to be discovered by H. Bingham.
Photo courtesy of National Geographic
LOCATION


The Urubamba river meanders and forms a turn before getting to Machu Picchu mountain, which, together with the Huayna (young) Picchu (mountain) comprises a "C", facing the Sachapata and Putucusi hills. These mountains, which have abrupt chasms, are surrounded by mountain ranges that form a majestic landscape and an insurmountable barrier at the same time. The beauty of this scenario coupled with religious significance impressed Inca Pachacuti , the architect of the empire, who ordered the construction of the urban complex in this very difficult site. 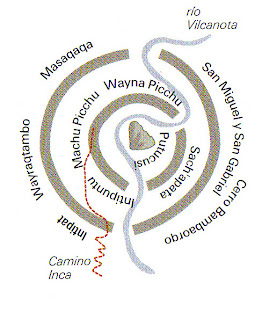 Geographical location of Machu Picchu in the Urubamba Valley.
Image courtesy of Oscar Charra based on data by Maria Rostorowski. 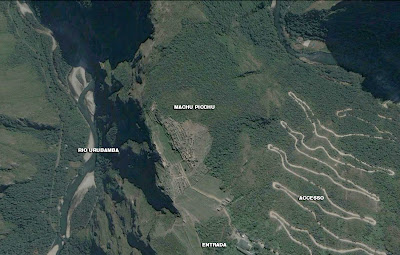 Map of Machu Picchu. Click on image to enlarge
Image courtesy of SA InterHabit
The Elorrieta brothers argue that, just as in the case of Cuzco's urban layout (the capital of the Inca Empire which was shaped like a puma), Machu Picchu's urban pattern symbolized a condor in flight. Fernando Cabieses, maintains that Machu Picchu expresses the conception of the three worlds of Inca cosmology: Hanan Pacha (upper world), Kay Pacha (world center) and Urin Pacha (underworld). 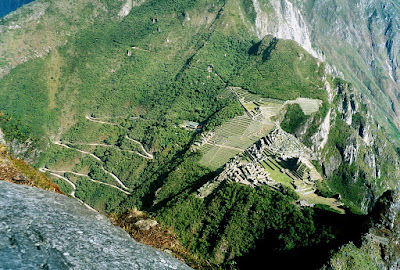 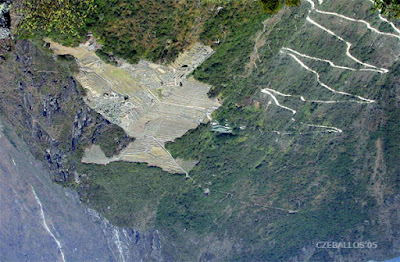 According Eliorreta and others, when Machu Picchu is seen upside down, it takes the form of a condor in flight.
Photo C. Zeballos


There are discrepancies about the city's role. For some, like Luis E. Valcárcel, Machu Picchu was a fortress; Hiram Bingham thought it was an area of ​​retreat for the virgins of the sun, Kauffmann Doig supposed it to be a place for strategic control of the conquered lands, some considered it an Inca refuge in case of an invasion and others as a sacred place for the rest and worship of the monarch. However, most experts agree that it was a llacta or town consisting of two sectors: agricultural and urban areas, both separated by a 500 meters long wall and a dry moat, which would have been a water trap.
The urban area had a population between 300 and 1000 inhabitants. Chavez Ballon (1961) proposed the division of the urban area into two sectors: Hanan (high) and Urin (low), according to the Andean tradition, organized at the sides of a long plaza. Fine water fountain is located perpendicularly to the main direction of the town, to which we will refer in the next post. 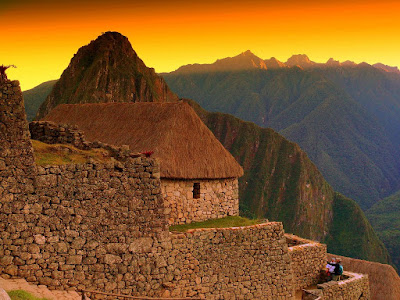 THE TEMPLE OF THE SUN.

F. Kauffman suggested that this structure, known as "the Tower", would have been a "curved religious construction, perhaps alluding to a shell (Strombus) that evoked water." However, as the architect Prof. Ricardo Cruz* noticed, most experts agree that this would have been an important temple in Machu Picchu, the temple of the sun.
The semi-circular building wraps around an emerging sacred stone or huaca. It has two windows, marked with lumps of stone in its external facade, facing the summer and winter solstices. During this time of the year the sun enters the windows, hitting on the sacred rock surface. 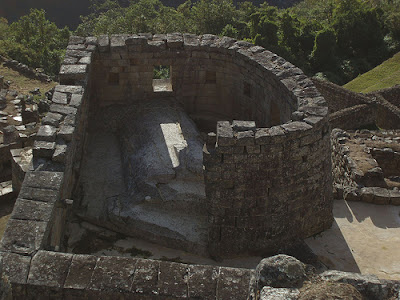 Temple of the sun during the winter solstice. Notice how the light is "divided" in half by the bulge in the rock. Photo courtesy of neilhinchley
Below the temple there is a tomb in which Hiram Bingham found the remains of a mummy facing the east, so it is associated with the winter solstice or Inti Raymi. Since this compound is finely carved and the stepped entrance is a symbol that represents the connection between the three worlds, the tomb can be seen as an entry into the underworld or Urin Pacha. 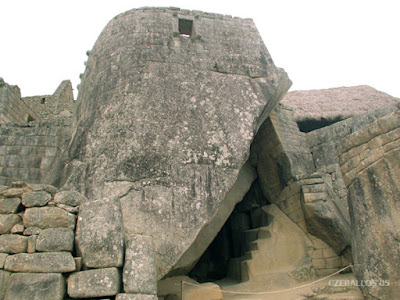 Detail of the entrance to the tomb and scatter symbols
Photo C. Zeballos
ROYAL RESIDENCE

A set of fine masonry buildings dedicated to housing is located between the Temple of the Sun and the Sacred Square. It communicates with the Temple of the Sun by a staircase, perpendicular to the main square. It also has immediate access to the first water fountain, indicating the importance of this building. 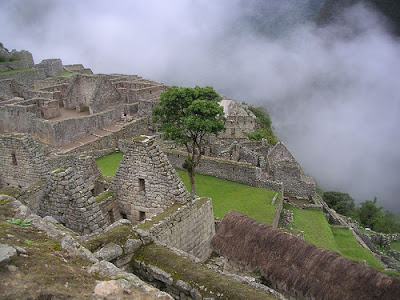 Surrounded by the most important buildings of all, the Sacred Square was a place where special ceremonies took place and evidence suggests its use in various rituals. In this space three main buildings are found:

It is a structure made ​​of large stone blocks, some of which are subsiding because of soil problems.The temple was under construction when Machu Picchu was abandoned. Inside, you can see a stone altar and a sculpture which, some say, they produce a shadow in the form of a drinking llama during the winter solstice. 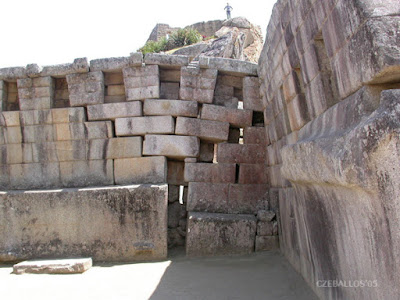 The Temple of Three Windows

Its three large trapezoidal windows with magnificent views of the landscape gave Hiram Bingham the idea that they symbolized the mythical three windows of Pacaritambo, but there is evidence that the temple originally had five windows. One side is opened to the square (since it was not concluded), and it contains a stepped structure representing the three worlds of the Inca cosmology. 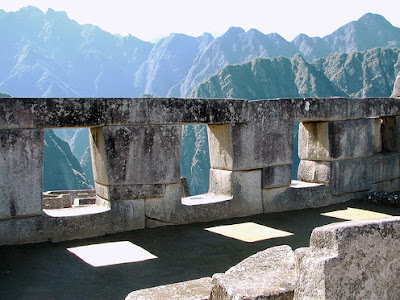 Sacristy
It is a minor fine masonry enclosure, behind the Main Temple. It includes large rocks, one of which features 32 corners.


This sector is composed by a series of terraces that form a polygon-based pyramid, which is accessed via two staircases. It was used for observing the stars and studying magical-religious agricultural calendars. 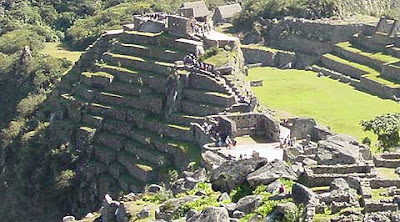 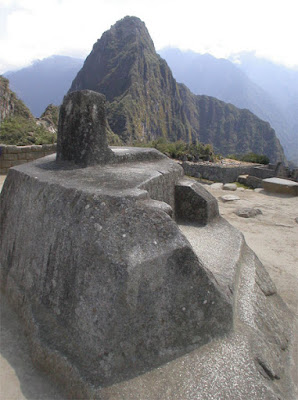 Intihuatana and Huayna Picchu in the background. Photo C. Zeballos

The most important element of this area is the Intihuatana, whose name (suggested by Bingham) means "to tie up the sun,". It is a polyhedral structure whose various angles and faces represent the goddess Mother Earth and it could be related to the surrounding mountains. The faces culminate in a granite block whose sides are oriented to the cardinal points.It was probably a major observatory during the summer solstice or Capac Raymi. 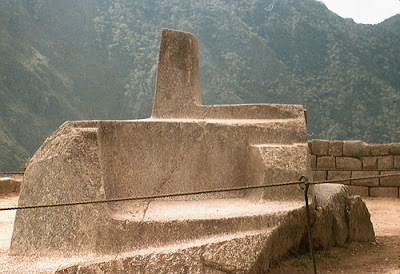 
Many people attributed to this energy and special magnetic properties.

THE SACRED ROCK
In one of the most striking evidences of the close relationship of symbolic and religious Inca urban planning and its surrounding landscape. The 7 m long 3 m high rock's flat side facing the square mimics the profile of the mountain behind, the Yanantin Apu. A similar case can be found in the fountain at Ollantaytambo . 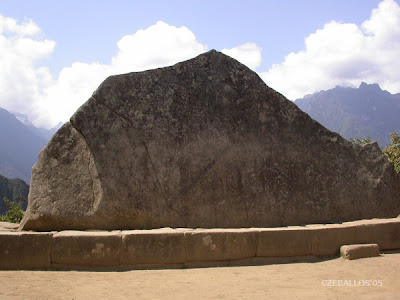 Sacred Rock at Machu Picchu.
Photo C. Zeballos
GROUP OF THREE DOORS
This area consists of rectangular fields or kanchas, accessed by three double-jambed doors. The finish of the masonry is not as fine as in other areas, so presumably it belonged to a lower social class. 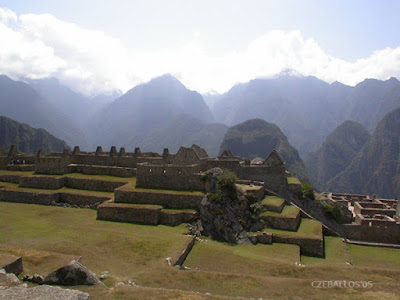 Group of three gates and main square. Photo C. Zeballos
THE CONDOR GROUP
The Temple of the Condor blends an impressive Inca masonry with a rock formation that resembles the wings of a condor in flight. In front of them is the bird's head with his distinctive collar, carved in rock. It has been speculated whether it could have been a sacrificial altar. Under the wings of the condor there is a cave, where a mummy was found. 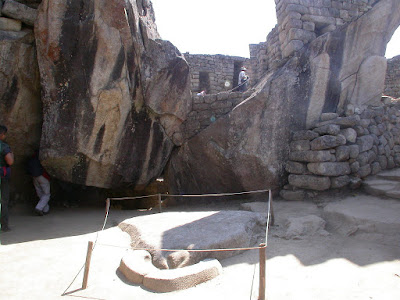 Temple of the Condor. The rocks represent the flying wings. Photo C. Zeballos
On the back of the temple the prison is located, which consisted of a group of niches with a maze of underground dungeons. 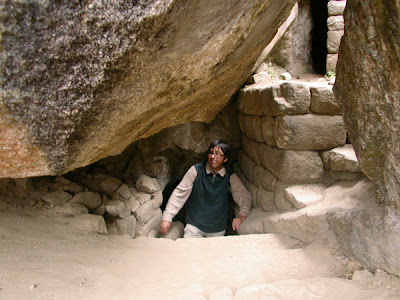 Arch R. Cruz getting out of prison (evil tongues say that he was put in jail for looting ... joke ...: P)
CENTRAL SQUARE

The central area is the hub of urban composition, closed on three sides and open to the north. Its oblong, elongated proportions divide the space into two areas: the Hanan to the west and Urin to the east.

Click here to see a reconstruction of Machu Picchu in 3D

The basic module of the rectangular and gabled kancha is repeated as a basic element of composition, varying according to the topography or the required functions. The stone walls have a slight inclination that gives them earthquake-resistant properties. The typical doors, windows and niches are in trapezoidal shape. Huge blocks were carved from river rocks (without the use of steel and iron chisels) and perfectly assembled together. Sometimes the quality of the finishing varies between different parts of the same building. 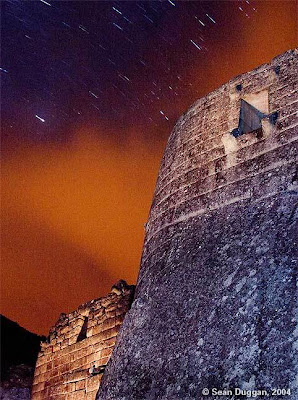 Detail of the temple of the sun. Photo courtesy of Sean Duggam 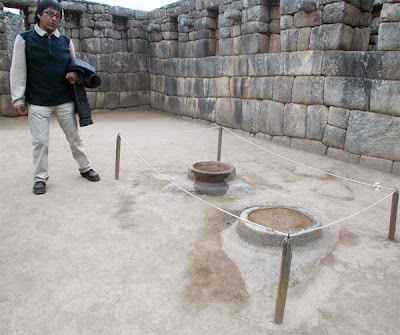 Arch.Cruz explaining stone pools that might have served for observing the stars.
Gary Ziegler and J. McKim Malvilla have conducted research on the symbolic meaning of the landscape and the environment for the inhabitants of Machu Picchu. Their most important observations related to the landscape are:
a) Stone sculptures as the ones found at the top of the agricultural area and the sacred rock represent the Yanatin montain, since it passed through major access routes.
b) The sequence of approach to the complex through monumental gates, the framed views of the Putucusi and Huayna Picchu mountains and entrance to the Sacred Plaza suggest a studied visual relationship between the sacred elements of the landscape and the use of roads and trails for important processions. 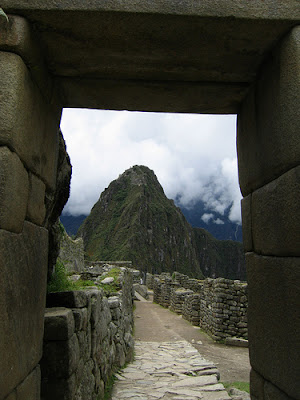 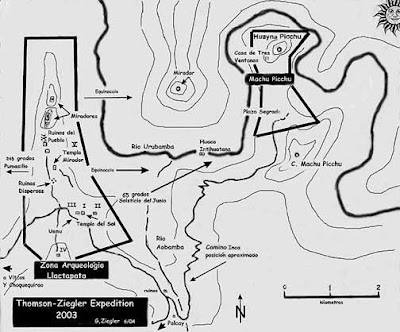 Map of the archaeological site of Llactapata. Image courtesy Thompon-Ziegler 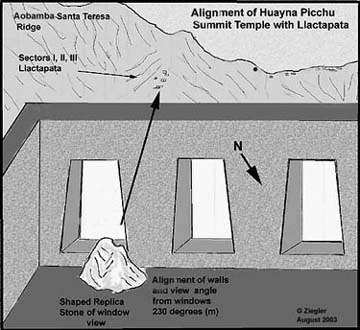 View Llactapatadesde the Temple of Three Windows
In this regard, see also the section on the Huacas, a communion between man and nature in the next post.

*Architect Ricardo Cruz C. senior lecturer at the Faculties of Architecture at the Alas Peruanas University and the San Agustin University in Arequipa, Peru. In the latter, completed a master's degree in Urban Planning and Environmental Management. 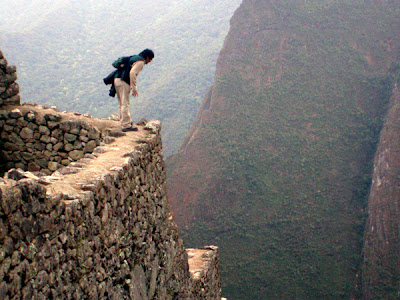