MIYAJIMA AND THE SHRINE ON THE SEA 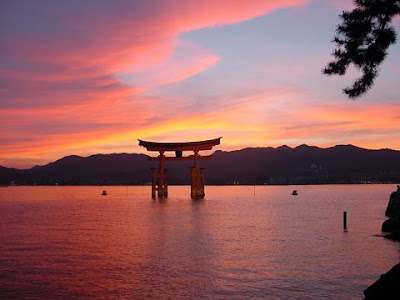 VERSIÓN EN ESPAÑOL
Japanese say that the three most beautiful sights in Japan are: the islands of Sendai, the beach of Amanohashidate, and Itsukushima Shinto Shrine on the island of Miyajima, near Hiroshima.

The truth is that the latter harmoniously combines the beauty of its landscape and its rich history, which earned a big point to be declared a World Heritage Site by UNESCO. 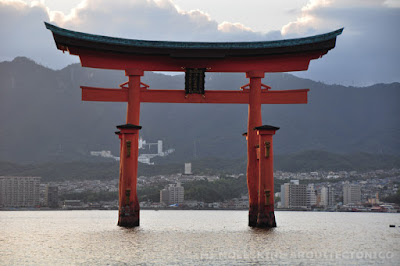 
Shinto (神道which means "the way of the gods”) is the native religion of Japan. It differs from most religions in the sense that it has no founder, doctrines, precepts and idols. The practice of animistic Shinto is based on the veneration of the kami or spirits. 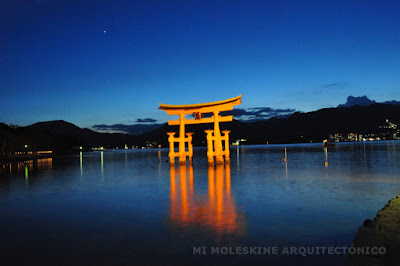 Some of the gods are local and are protectors of a particular place, but others have a special veneration, as the sun or Mount Fuji (this type of animism reminds me the apus of Inca Planning .)

The Shinto religion therefore proclaims a love for the elements of nature and architecture has often a relationship with their environment and natural landscape. Having no good accounts about the origin of Shinto in Japan, it has been heavily influenced by Buddhism, and at some point in history the two religions had an interesting fusion. The Shinto was nevertheless declared the state religion before the war and was closely associated with the emperor. After the war, many practices were abandoned, while others, such as New Year's celebration is shared by all Japanese regardless of their creed. 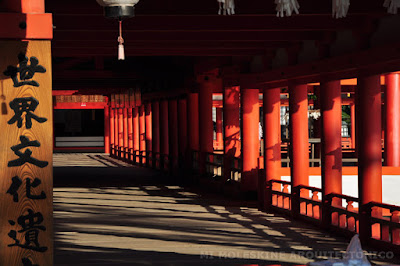 Miyajima, which means "Shrine Island”, has been revered since ancient times, where traces of buildings from 593 were found. The unusual idea of constructing a sanctuary on the water is inspired by the devotion to the deity of the sea, and it is believed that the island was an object of worship having a fairly closed bay which is ideal for the location of a sanctuary, as the ancient Chinese geomancy ( Feng Shui). 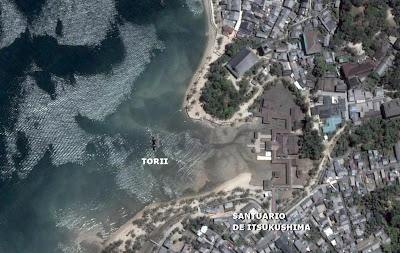 See location on Google Maps.
During the Heian period around 1148, and thanks to its patron Taira-no-Kiyomori, the sanctuary became an important place of worship, being visited for several times by the emperor and his court, who lived in Kyoto.
The complex consists of several buildings scattered on the mountain. These buildings, which have been rebuilt several times, consist of a main sanctuary and several subsidiary shrines connected by roads or galleries. 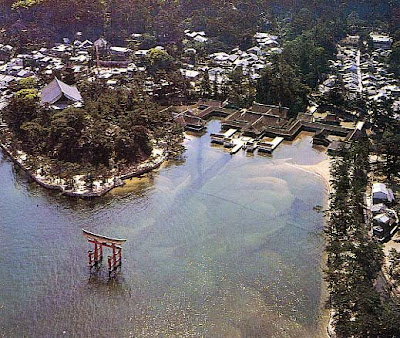 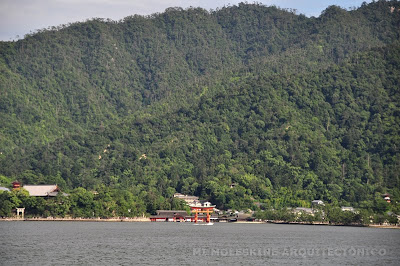 Standing in the bay in front of the shrine, the floating torii is the "gate" to Itsukushima. It is a large portico of vermilion which rests on the bottom sea, without being embedded in the sand. It was rebuilt with camphor wood in 1875 (Meiji period), reaching a height of 16 m., with the pillars having a circumference of 9.9 m. 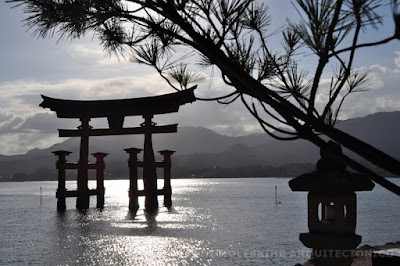 Unlike traditional toriis or porches, which are only consisted of two pillars, the latter have an additional four smaller pillars, giving it more stability and grandeur. 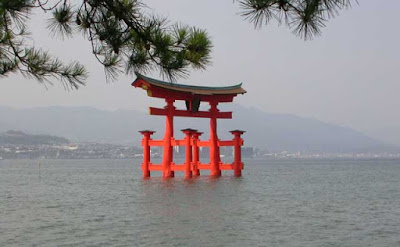 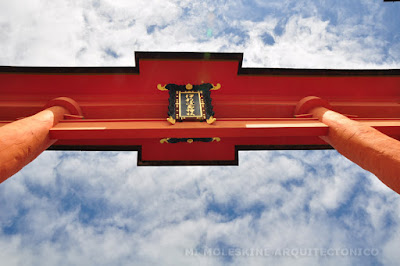 In front of the Otorii is the main sanctuary, the Itsukushima Shrine, which is consisted of three areas: The Holy Hall where the gods live, (Heiden), an inner part where only the priests enter (Haiden), and the external area for worship of the public (Haraiden). 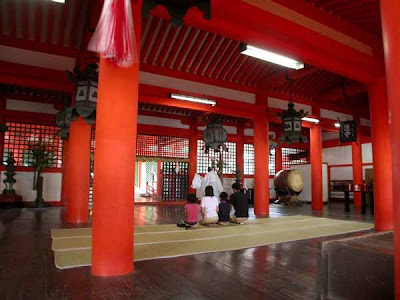 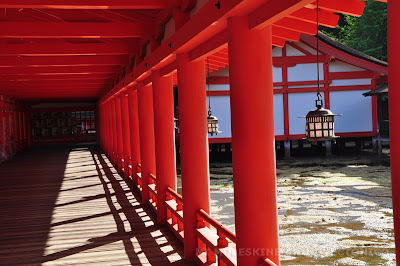 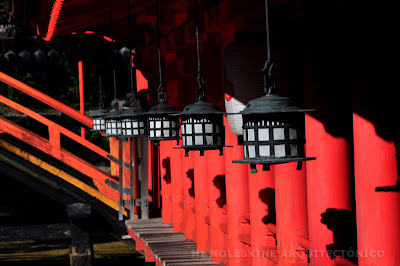 Being suspended on piles of stone, when the tide is high, the sanctuary gives the impression that it was a boat floating in the sea. 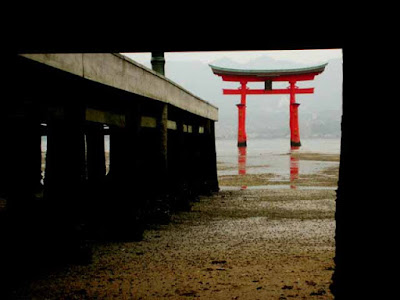 Its architecture is simple, and its thatched roof lacks some typical ornaments of the Heian Japanese architecture, such as gold bumps shaped horns. 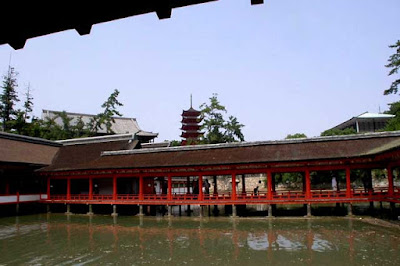 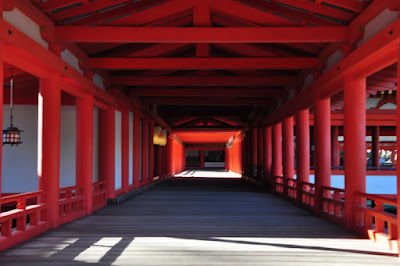 The photo also shows the 5-story pagoda (27 m high), dated about 1417, and skillfully blends Japanese and Chinese styles. Pagodas always had an odd number of floors, and inside is the image of Buddha colorfully portrayed. 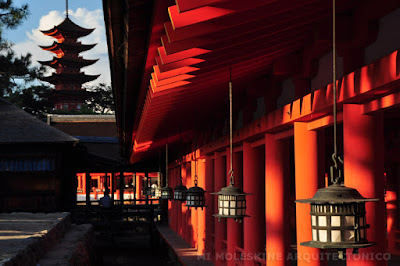 In front of the Otorii is a platform called Otorii Bugaku, flanked by beautiful bronze lanterns where musical performances take place during the festival of Kangensai, reminiscent of the Heian period that still takes place in mid-summer under a full moon. 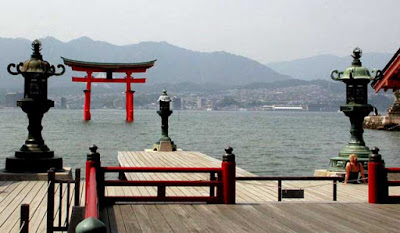 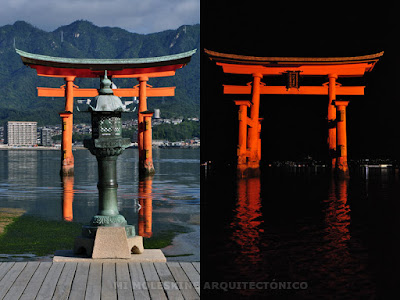 One minor pagoda is the Tahoto (15.6 m), built by a priest in 1523. Its plan has a square shape at its base and circular in its upper level, a unique combination in this type of architecture. 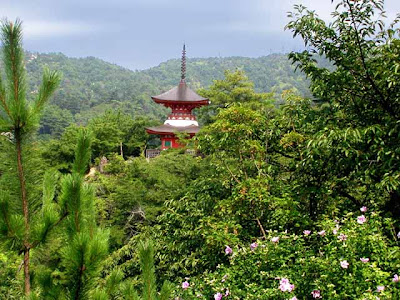 Another notable building is the Daisho-in, nestled in the woods. 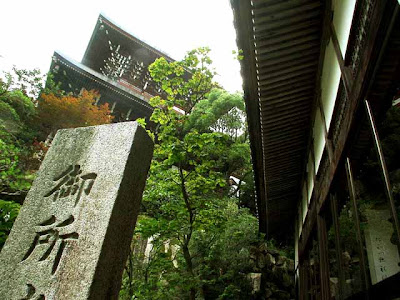 It has a porch that is a long staircase, adorned by hundreds of small images of Buddha, and culminates in a larger sanctuary, accompanied by beautiful gardens and waterfalls, whose subtlety in design and perfect harmony with the landscape is such that first sight is not possible to discern whether it is a garden made by man or beautifully crafted by nature. 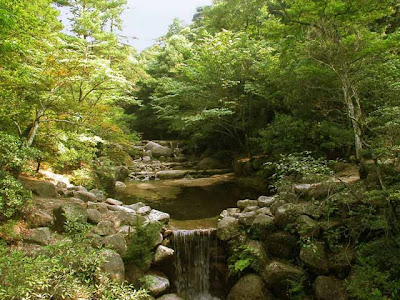 The highest peak of the island is Mount Misen (530 m) which is accessible by cable car. At its peak, one can find hungry and sometimes unfriendly monkeys or cute and funny deer.

As in Nara, deer are considered animals of divine properties.
As an ironic counterpart to the horror caused by the explosion of the atomic bomb , a few miles from Hiroshima is situated one of the most beautiful scenery in the world, where the man wisely knew how the harmonious relationship that exist between the built and natural. 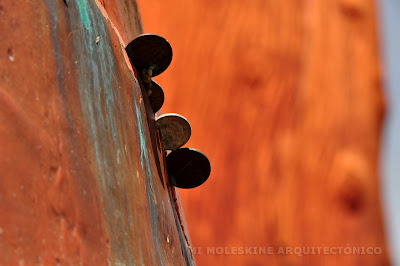 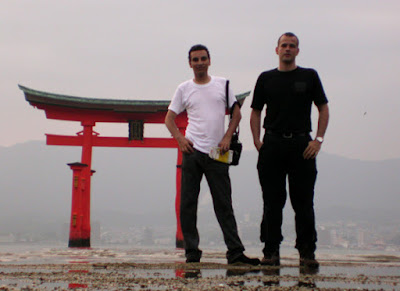 Next to the Dominican architect Juan Tineo, at low tide

Posted by Carlos Zeballos at 7:03 PM