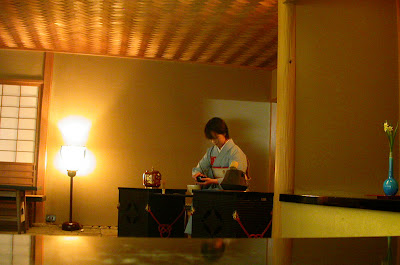 When tea is made with water drawn from the depths of mind
Whose bottom is beyond measure,
We really have what is called cha-no-yu.
Toyotomi Hideyoshi 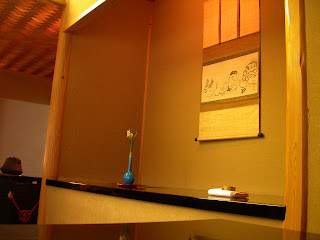 Tea is one of the most conspicuous elements in Japanese culture. Since its introduction during the 10th century by Zen monks from China, its use has evolved, influencing many arts such as calligraphy, architecture and garden design, flower arranging, pottery or poetry.
The complex and fine aesthetic developed around the tea ceremony, modeled by the tea master Sen Rikyu Soeki, goes far beyond simply being a beverage or fulfilling a social role, as in the West.
Thus, in medieval Japan, during the time of the bloody wars between states (1467-1572), the tea ceremony (sadō or chanoyu) became a symbol of peace, a ritual where the samurai found peace after coming back from battle. In fact, they had to leave their swords outside, before entering the premises of the tea house. As Plutschow mentioned, tea ceremony is a sacred ritual, as it is sacred the space where it is prepared and sacred are the utensils used therein.
However, in the sadō deities are not invoked, so the "sacred" ceremony lies in the assembly gathered in the tea house. The participants are those who become sacred, since Zen Buddhism, under whose influence the tea ceremony took shape, looks for the sacredness not outside but within the human being. 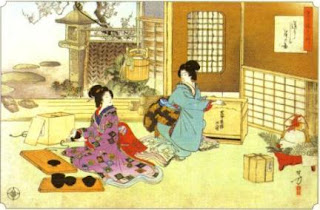 In that sense, it is common for tea houses to be separated from the outside world, usually by a very subtle element. This is the case of Kano Shoju-an, a quiet tea house located at the southern end of the Philosophy Path in Kyoto, which is separated from it by a footbridge across the stream, and in that way detaching the visitors from their mundane daily life. 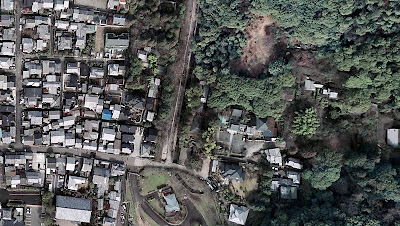 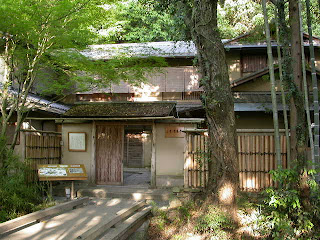 Entrance to the Tea House Shoju An Kano. Photo C. Zeballos.
However, despite its sacred character, the aesthetics of the tea houses are far from the opulence that can be found in a temple. By contrast, the Kano Shoju-an is a construction that enhances the fragile and fleeting nature of life, based on principles such as wabi (the beauty of things imperfect, simple and natural) and sabi (the patina covering things over time.) 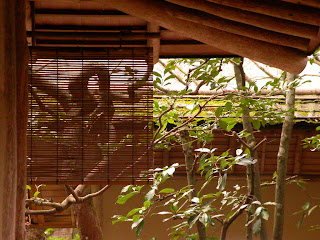 Details of the shoji screens. Photo C. Zeballos.
THE SŌAN STYLE
"Soan" means "grass hut" and refers to the typical characteristics found in many of the teahouses. It was influenced by the style Shoin, that we will discuss in the next post.

The Kano Shoju-an has, like most tea houses, two elements: the garden and the building itself. Very simple materials make up the garden, although it is carefully designed. The path of stones or roji, which features a larger stone at the entrance, the gravel paths, the finely arranged thatched islets, the stone where visitors take off their shoes or kutsunugi ishi, are part of a complex but subtle micro cosmos surrounding the tea house. 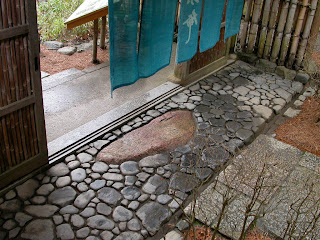 The construction system of the house uses bamboo walls and columns, coated with mud and rice straw roofs. 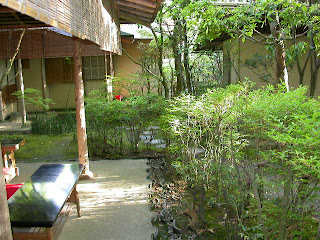 In front of the windows, there are some suspended screens made of woven straw, which are climatic devices, since they protect the inside from the incidence of the sun during hot days while not preventing the passage of the breeze, and they can be removed in winter. 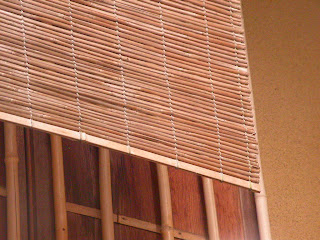 Inside, space flows between the different environments with harmony and flexibility. 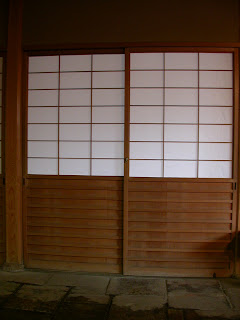 The fine sliding screens or shoji (which is a window of rice paper framed by a wooden lattice), the terraces, the wide windows and the simplicity and lightness of the materials help establishing a strong link between the interior and exterior environment. In fact, the exterior is used as a "tableau" since the window frames a particular view by being located at a certain height and position. 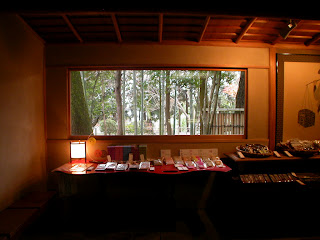 The soft lighting contributes to enhance the atmosphere of the place for meditation. Inside the house, we are received in a semi-public area of stone floor, where visitors await their turn to participate in the ceremony. Like many Japanese arts, the Sadō is a participatory event and it takes place in a special environment. After slipping a screen, a pretty maiko or apprentice of geisha invites us to enter tea room, where there are sunk niches or tokonoma. Usually the tea rooms have tatami floor (finely woven straw mats), but in this case, the floor is also made of stone. It contains the tools that will be used for the ceremony and a flower arrangement called ikebana . 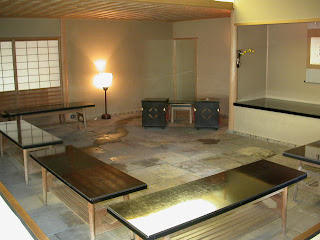 In one corner (Tama datami) the preparation of tea is carried out . 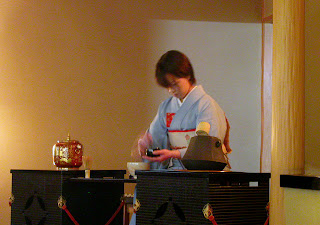 The guests are located in an area in the opposite side (Kyaku datami). While the maiko performs the preparation of tea, an assistant gives us a Japanese sweet of pasty consistency, smooth appearance but nice flavor, called Warabimochi , made from rice and vegetables. Then we are served thick and slightly bitter green tea (macha ) in a fine lacquer pot (chawan ).
The chawan is delivered by turning it 180 degrees in three small movements. After a respectful bow, the guest turns the pot in reverse and proceeds to drink the bevarage. 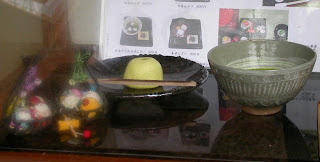 For a Westerner like me, quite a beginner at the time of the ceremony took place, I was overwhelmed by the solemnity, elegance and the skill with which it was carried out. It transmits peace, tranquility and also admiration for the exquisite, fine beauty and harmony in the delicate choreography that involves the preparation and serving of the tea.
For a Japanese, however, Sadō is a condensed, stylized version of everyday life.

"What is the cause of suffering, the cause of life, since we deny the existence of a God who created the universe? That concept is what Buddha called the zen .... We have to the suffering from the beginning, which is the zen. And the Zen produces life and life is necessarily unhappy, because what is life? Living is birth, aging, illness, death, and other ills, including a very pathetic evil, not to be with the ones we love. " 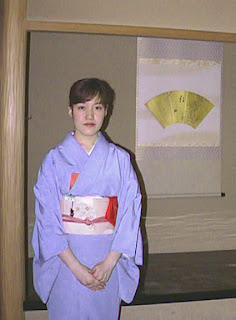 Posted by Carlos Zeballos at 12:04 PM